A Musical Sojourn by CrossStrings Duo

A Musical Sojourn by CrossStrings Duo

CrossStrings Duo is made up of two of Sabah’s most prominent musicians, guitarist Stanley Chin and violinist Yap Ling. As musicians and teachers, Stanley and Yap Ling have brought about a new appreciation, and awaken a passion for performance art amongst Sabah’s youth. 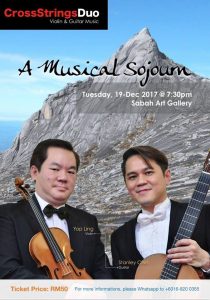 A Musical Sojourn by CrossStrings Duo by these amazing string maestros will be an evening of original and re-arranged works in different genres, and includes compositions by famous composers such as Paganini, Emmanuel Falla, Albeniz, Giulliani and Piazzolla.

As a guitarist, Stanley has appeared both as a soloist and chamber musician which he performs frequently with various local and international musicians. In 2007, he was invited to join Fuegokoori, a guitar-cello group and has performed extensively since then. Besides performing, Stanley also dedicates his time to teaching and has founded several performing groups to nurture more musicians for the future.

Yap Ling is a versatile musician who performs, teaches, conducts and arranges music. He is the conductor and founder of Jesselton Philharmonic Orchestra (JPO) and various other youth and community-based orchestras. This includes the Outreach Teaching Program he started that enables the teaching of string instruments at orphanages and hostels in several rural communities. To date, more than 100 students are receiving free tutelage under his leadership.