The bustling city of Bangalore, or now officially known as Bengaluru, is the capital of the Indian state of Karnataka, and is the third most populous city in India. Located in the southern part of India on the Deccan Plateau, it is India’s highest major city enjoying moderate climate all year long. Wan Zainal Shazali checks into the Shangri-La Hotel Bengaluru for a truly Indian getaway. 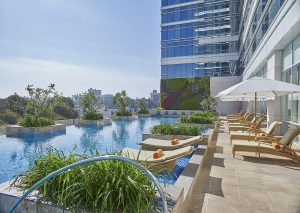 The outdoor pool at the Shangri-La Bengaluru

It was late January when I headed to Bengaluru – the Silicon Valley of India. From shopping to star dining attractions, this once sleepy regional capital is today a modern metropolis filled with a myriad of charms, much to my big surprise as a first time visitor to India. I arrived at this cosmopolitan city late one afternoon and drove past a plethora of old buildings, colourful markets, temples and charming gardens tucked in between streets, which tells me that despite the bustling development, the city’s Indian appeal remained unaltered. This place was, after all, once The Garden City of India. The recent hotel openings like the Shangri-La, the vibrant cafés and restaurant culture with impeccable service, have added style and luxury to the cultural melee on MG Road – one of the busiest roads in the city. 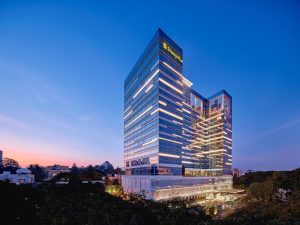 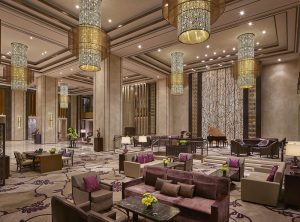 The Lobby Lounge at the Shangri-La

The Shangri-La Hotel is a 19-storey tower that is perfectly located on the fringe of the central business district and the upscale residential suburbs of Bengaluru, and it commands uninterrupted views of the cityscape including iconic landmarks like the Military Memorial, Cubbon Park and the historic Bengaluru Palace. The 397 guestrooms are styled in earthy colours enhanced with light and dark timbers, tufted leather headboards and carved Indian embellishments that perfectly blend with Shangri-La’s Asian brand values. The hotel’s design cues are derived from floral forms, giving a nod to the Bengaluru’s Garden City moniker. From carpets to furniture and light fittings to decorative screens, the entire hotel is laced with these beautiful abstract patterns. Exquisite rare marble and intricate brass fret work complete the patrician air one would expect from one of the newest luxury hotels in India. 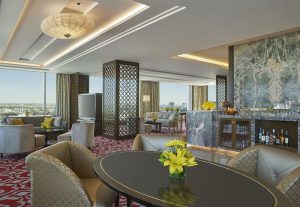 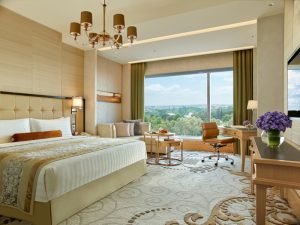 Deluxe Room at the Shangri-La 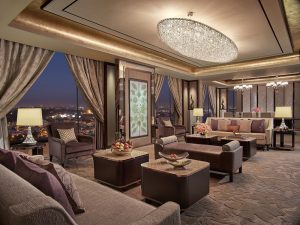 The Suite at the Shangri-La

My spacious suite comes with a separate living and dining area, ideal for informal meetings in the privacy of my own room. It is one of the thirty suites in the hotel with full access to the Horizon Club Lounge that offers the privacy of express check-in and check-out, complimentary breakfasts, cocktails in the evenings and a full concierge service. I spent most evenings unwinding in the lounge after a day of exploring the city, soaking in the sunset and unparalleled panoramic views of the city while being rewarded with beautiful sightings of eagles that can be seen soaring above lakes and in the nearby trees. 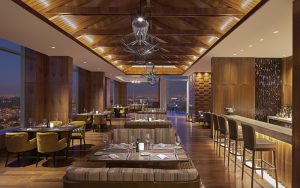 Caprese, the Italian restaurant at Shangri-La 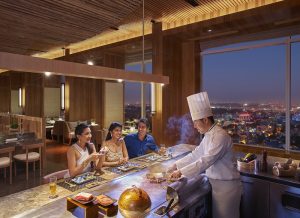 While dining options are aplenty in Bengaluru, the hotel offers one of the largest food and beverage choices in the city, all in spectacular settings. Caprese, the Italian restaurant and b Café, the all-day dining restaurant, are talking points for their excellent food. I had a memorable Japanese kaiseki dinner at Yataii and entertained some friends at the glamourous and lively Hype bar on the rooftop – a local scenester’s go-to destination. Unfortunately, I didn’t get to try Ssaffron, their opulent Indian restaurant, and Shang Palace, their modern Chinese restaurant, but judging from the rave reviews they have been gaining in the press, these two outlets are certainly making their mark on the local culinary scene. I will make a note to try both of them the next time I’m in town. 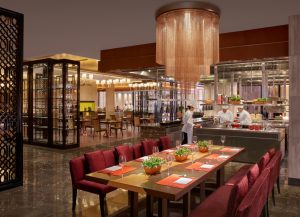 Open kitchens at the b Café 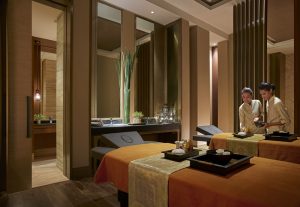 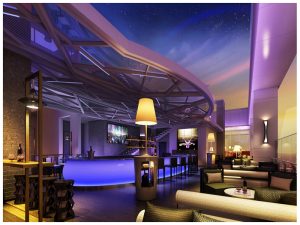 Hype – a glamourous rooftop bar at the Shangri-La

This article first appeared in the July-September 2017 issue of Borneo Insider’s Guide magazine.