The votes are in, New York has the best restaurant in the world. Eleven Madison Park tops the list of The World’s Best 50 Restaurants this year as well as The Best Restaurant in North America. After debuting on the list at no. 50 in 2010, Eleven Madison Park, owned by Will Guidara and Swiss-born chef Daniel Humm, has hovered within the top 10 since 2012, rising to no. 3 last year. Housed in an art deco building overlooking New York’s Madison Park, the restaurant’s multi-course seasonal tasting menu celebrates the city’s rich history and culinary traditions. This year’s winners were revealed and celebrated at an awards ceremony at the historical Royal Exhibition Building in Melbourne.

Last year’s top restaurant Osteria Francescana in Modena, Italy, slipped to second place but remained the best in Europe.  7th place position went to Gaggan in Bangkok which retained The Best Restaurant in Asia for the third year running. Singapore’s Andre leapt 18 places to no. 14 and Tokyo’s Narisawa arrived at no. 18.

Asia has seven restaurants in the top 50 with Japan and Thailand each having two entries. France doubled its number of restaurants on the list, of the six entries, three rank in the top 20. Mirazur leads at no. 4, followed by Arpege at no. 12 and Alain Ducasse au Plaza Athenee at no. 13. Spain has a strong presence with three of its six restaurants landing in the top 10. Host country Australia is represented by two restaurants – Attica in Melbourne (no. 32) which is also the Best Restaurant in Australia, and Brae in Victoria, entering the list for the first time at 44th place.

New York-based pastry chef Dominique Ansel is honoured this year with The World’s Best Pastry Chef title. Since opening his SoHo bakery in 2011 and launching the Cronut, his signature croissant-doughnut hybrid, he has extended his pastry reach to London and Tokyo. The coveted award for Best Female Chef 2017 goes to Ana Ros of Hisa Franko in Slovenia.  Celebrity chef Heston Blumenthal was honoured with a Diners Club Lifetime Achivement Award and his London restaurant, Dinner by Heston Blumenthal, sits proudly at 36th place.

The World’s 50 Best Restaurants list has been published yearly since 2002. The list of created from the votes of The World’s 50 Best Restaurants Academy. The panel in each region is made up of food writers and critics, chefs, restaurateurs and highly regarded ‘gastronomes’. Members list their choices in order of preference, based on their best restaurant experiences of the previous 18 months.

See what other restaurants made the cut by checking out the website here. 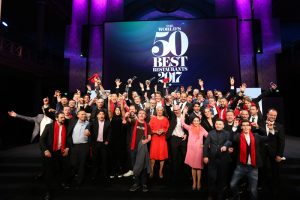