A perfectly overcast Sunday afternoon had me visiting the Biodiversity Park at the Berakas Forest Reserve to witness my first ever LARPing session in Brunei. The park was quiet, with only a few families at the children’s playground, a smattering of tourists, a few joggers, and a group of guys in costume chilling under the shade clutching lifelike foam swords.

One would expect a battle, and indeed a battle was waged. With seven members of the Brunei LARPers present (half of their actual number), masks were donned, swords were wielded, poses were struck, and with a battle cry that somewhat spoiled the tranquility of the park, some pride was won. 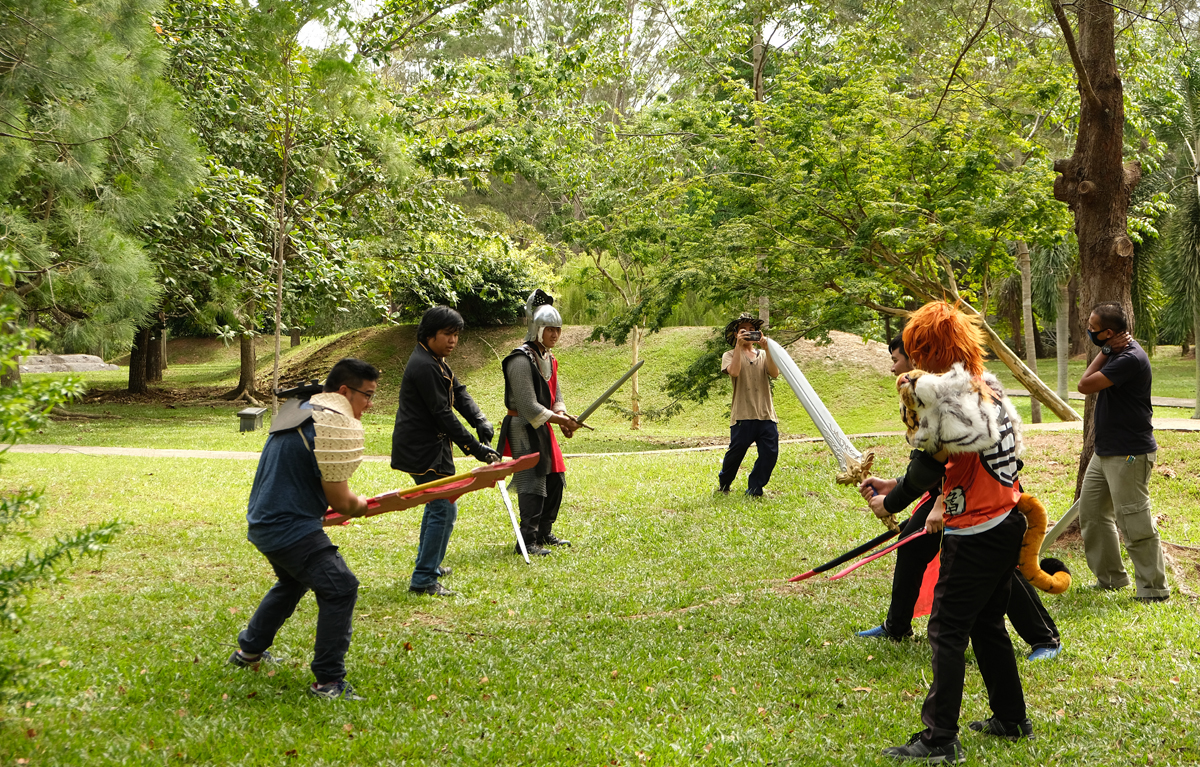 The secretary of the Brunei LARPers, Jeffri bin Johari (aka Rey), greeted me in costume. As the financing of this organisation comes from the members’ own pockets, costumes worn on the day ranged from an impressive looking medieval knight to a guy wearing a mouth mask. Also, I’m quite sure a lot of duct tape was sacrificed in the making of this particular session. No matter. What the LARPers lacked in costume they most certainly made up for in enthusiasm.

For the uninitiated, LARP (Live Action Role Playing) is RPG in real life, without the awesome graphics. Participants come dressed in costume and engage in battle. And before you liken it to Cosplay, don’t be mistaken: LARPing might have origins in the lucrative world of the Cosplaying industry, but while Cosplay is the representation of a specific character by putting on immaculate costumes and accessories, LARPing is more of a sport.

And there’s no better way to start exploring some of your battle fetishes than with the Brunei LARPers – a tight-knit group of people ranging from ages 15 to 31, who find joy in what they do. They also actively encourage others to join in the fun, performing LARP demonstrations in schools as well as for charity. In Brunei, LARPing is still in its early stages so their sessions focus on having fun and ensuring each participant has fun safely. Safety is not taken lightly with the Brunei LARPers, who have a couple of members qualified in First Aid training, ensuring that each LARP session is an absolutely safe way for people to get their geek on and play out their fantasies on the field. 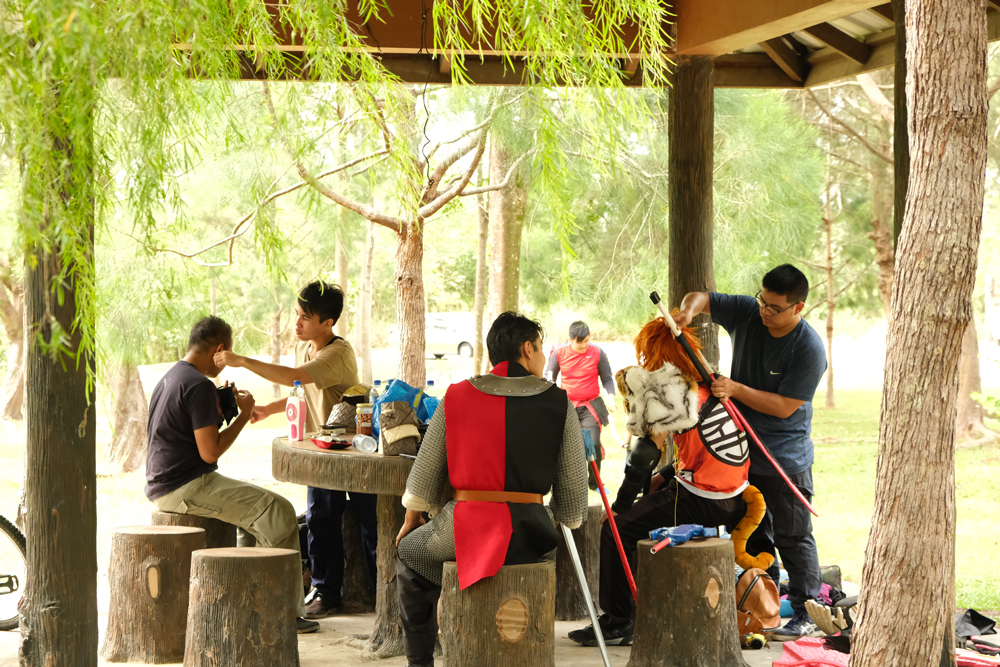 While LARPing might still be trying to find a foothold in the mainstream industry here, in other parts of the world LARPing is a huge affair that hundreds of people take part in. The attraction is obvious. This is a fun way to get creative, envisioning what character to become and then making or purchasing the weapons and attire to make the character work. It’s also a great work out: going through training and battles absolutely improves stamina and health, and LARPing is one of the new fitness trends gaining hype all over the world.

There are challenges of course, on the field and off. “Some of the difficulties we face is finding the right place to hold our sessions,” Jeff informed me. “Safety is very important to us and so the location needs to be right. Comfort is also a big factor in choosing a location as well. As a committee, we all have our share of work to do in getting all the details on point for each LARP session, in dealing with rules and regulations and activity details. But as long as everyone gets to play safely and enjoy it, we’re very willing to go through all of that.” 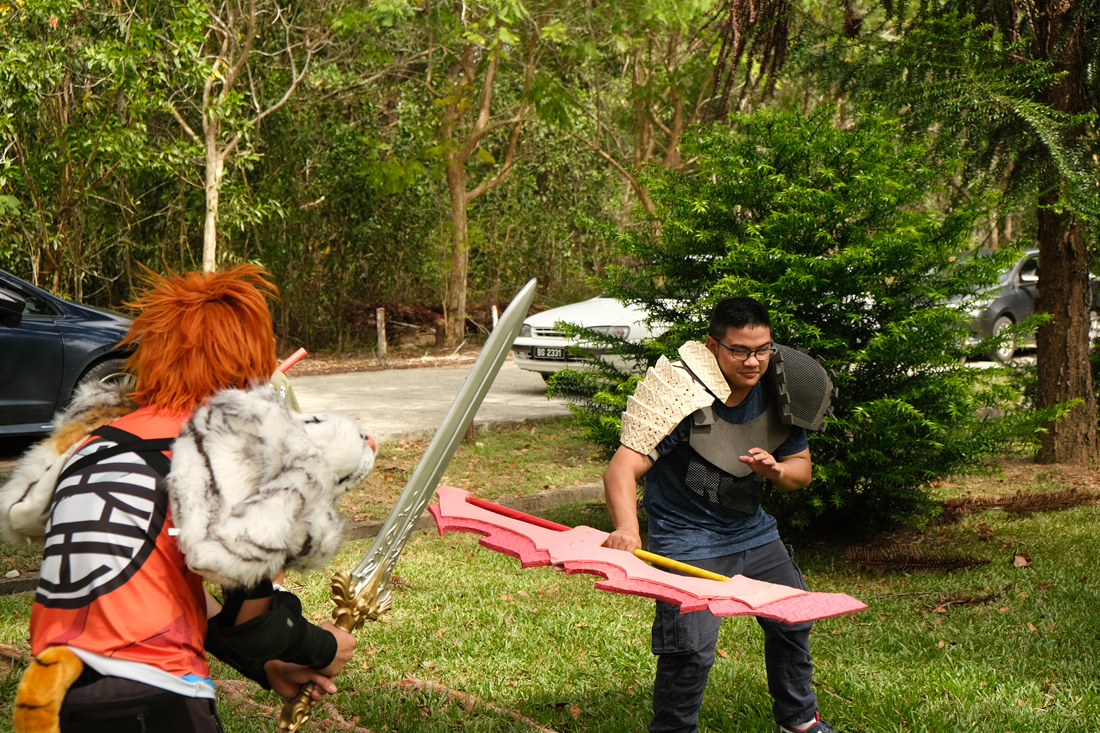 Another issue might just be LARPing itself – grown-ups in costumes armed with foam weapons waging battles in a park is bound to raise a few eyebrows. But what people don’t understand is just how fun and immersive an experience it can be, and with such a welcoming committee as this, it’s very easy to forget the naysayers, don a costume, pick up a sword, and jump right in.

Naysayers certainly didn’t stop the members from handing a foam sword to my seven-year old son and teaching him the basics, before letting him go crazy on the field brandishing his weapon while performing some energetic – and terrible – swordplay. At the end of it he was demanding a costume for the next LARP session. And while I’m preparing for all of that, I might consider making an elf outfit, some prosthetic ears, and a bow and arrow for myself, just so I can join in the fun. 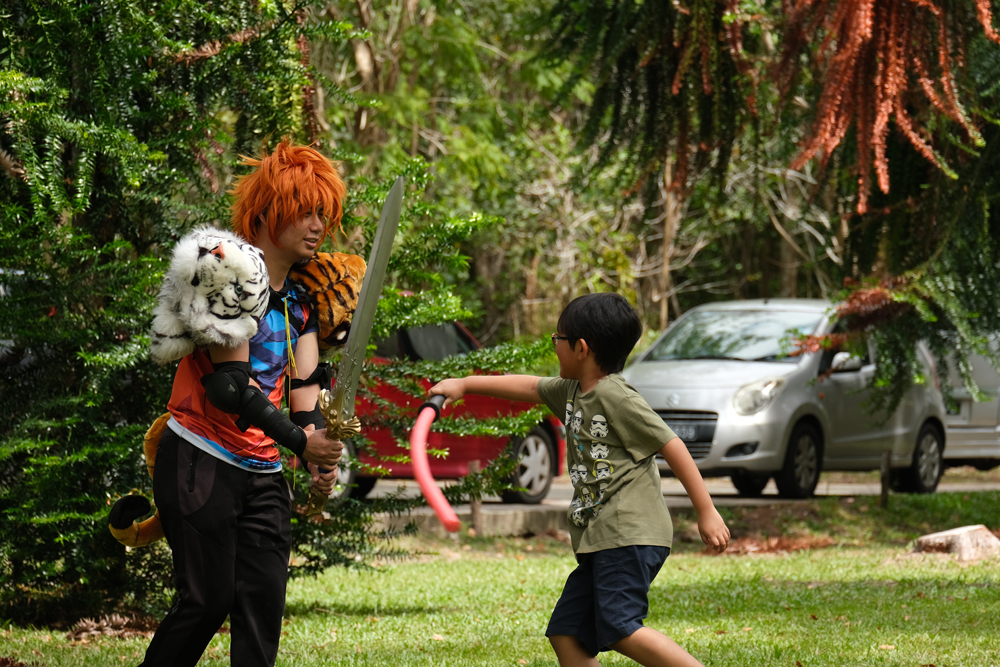 In Brunei, members of the Executive Committee of the Free Cosplay Association oversee Brunei LARPing activities, namely Dinie aka Dai (as the Head of Delegates), Mohammad Abdul Khaliq aka Kilik (the President of the FCA) and Jeffri, as the FCA Secretary.

The most common battles in a LARP game are 1 vs 1, team vs team, and free for all. Points are awarded based on where a hit is landed (points are deducted when hands are used to block a weapon or for grabbing a person; points are also deducted for any hits to the head or use of the body to perform harm such as kicking or elbowing).

The most common rule of LARPing is that the Marshal gets the final word during game preparations off the field and game play on the field. Marshals are responsible for ensuring the standard of attire, equipment, game setup and player etiquette. While in Brunei, participants are invited to wear anything they want, certain safety issues remain in play and Marshals will decide if weapons or outfits used are deemed safe for play. Marshals can also call time out by calling out “Freeze” in a game, during which players must stay immobile in their current positions.h