Last month, Toronto-based composer Jeremy Dutcher hosted a workshop for a room full of young local musicians at iCenter, organized by the High Commission of Canada in Brunei Darussalam in partnership with Kaleidoscope Studio, and it was an evening that turned into a lot of fun. At his encouragement, various youths came to the front to pick up different instruments to start an impromptu jamming session of traditional Bruneian songs with the Canadian artist, and it was tremendously uplifting in sight and sound.

If anyone should come to Brunei to inspire musicians to remember their roots, it would undoubtedly be Jeremy Dutcher – a classically trained vocalist who has used his soaring operatic tone to good use by educating listeners about the Maliseet culture from the Wolastoq (Maliseet) nation, of which he is a proud member of. His upcoming album, Wolastoqiyik Lintuwakonawa, is part composition, part ethnography, part linguistic reclamation, and is sung wholly in the native and endangered Wolastoqey language – a language that only an estimate of 500 people in Canada can speak.

His personal and impassioned pursuit toward creating a catchy, contemporary album to preserve the Maliseet culture started from when he was studying classical music at Dalhousie University.

“Music has always been a community-based thing and it was always about helping each other, singing with each other, and it was really beautiful, and unfortunately I didn’t see a lot of that in school. And so for a long time, I looked around and tried to find classical music that had content that was indigenous or about my people, and there was nothing. So I thought, well, if there’s nothing out there, I guess I’m going to have to write it. So that’s when I started combining traditional music with classical music. But it wasn’t until I heard the old wax cylinders that I decided, okay, this is it, I have to do something with this music because it’s so beautiful.”

Before there was vinyl, music was recorded using wax cylinders. After spending a few days working with archivists at the Museum of Canadian History, Jeremy was able to unearth some of the earliest known recordings of indigenous people in Canada. “In a lot of my music I use old recordings from 1907. It’s such an important record of our traditional ways and our traditional music that it deserves to be saved. Basically, the whole idea of the project was to make these old, old songs more accessible for the younger generation, and to try to bring it back to the community.”

With a musical style that cannot be put into any certain category as it blends different music elements to create something new, Jeremy’s latest album is the merging of classical and traditional, turning century-old melodies into contemporary music.

“It’s all about accessibility, trying to reach people who wouldn’t value traditional songs and showing it in a way that is very accessible and tuneful – something you can put on when you’re getting ready in the morning. And it was really, really important to sing it in the native language, because our language is at a very dangerous point right now. If people my age don’t start learning it, then it’s going to die out forever. When a language is lost, we don’t just lose words, we’re losing entire ways of thinking about the world. “

As for the local youths that Jeremy inspired when he was in Brunei, he offers this advice: “Be sure of your vision and what you want to do, because it truly is unique. You have to plan and you have to be intentional about how you present what you do. You need to know what you’re good at and you need to be able to relay your story to people, because at the end of the day, people want stories, and so what I do is just try to tell them about me and the kinds of music that I make, and people are curious now about my people, which wasn’t the case before. It may also be a case of good timing and a little bit of luck helps as well.”

Music is one product of humanity that can transcend language and time. Jeremy Dutcher is teaching the world about his culture through his latest album, and with a little hope – and luck – some of our local musicians will be inspired to do the same.

Jeremy Dutcher was invited to Brunei Darussalam by the High Commission of Canada in Brunei Darussalam to perform an evening recital at Radisson Hotel Brunei for esteemed guests to commemorate 150 years of the confederation. The event aimed to celebrate Canada’s shared values and achievements which carry different themes: Diversity and Inclusion, Reconciliation with Indigenous Peoples, Youth and Environment. 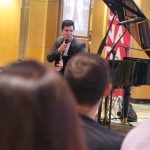 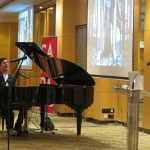 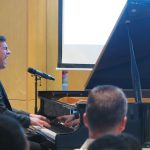 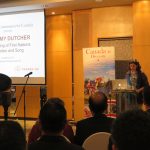 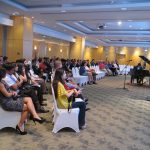 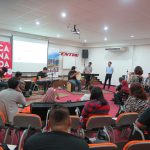 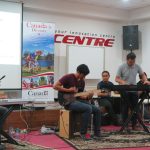