Text and images by Irene Chan

And then: zinc sheets, coffins and Charles Brooke.

As improbable a combination as all of those things sounds, that is precisely the amalgamation of elements that the increasingly popular Kai Joo Lane Night Market is made up of.

Hidden right in heart of Old Kuching, next to the central police station, Kai Joo Lane consists of two rows of 32 shops built in 1923 by a Teochew businessman – Teo Kai Joo. Kai Joo was supposedly friendly with the White Rajah of the day, Charles Brooke, and the locality was thus named by the latter.

In its most recent incarnation, Kai Joo Lane has become the unlikely venue for one of the most popular preoccupations among the residents of Kuching – food-hunting.

Every Friday and Saturday, hip young millennials and avid foodies alike throng the unassuming little lane which is nestled next to the looming shopping mall, Plaza Merdeka. Heritage foods, some still popular, some almost-forgotten, can be found here, much to the delight of hipsters seeking new experiences that hearken back to Old Kuching.

The satay vendor can be observed diligently hammering freshly-grilled sotong bakar, a once-popular chewy dried cuttlefish snack. A group of young people watches on in fascination as the proprietor of the kantong stall deftly assembles a cool creation of shaved ice and syrup packed onto a stick, a cold treat from a time before ice-creams were commercially-available.

However, it is not all just about nostalgia. Families and the older people flock to this hidden haven to indulge in the comforting familiarity of some of Kuching’s finest street foods. Humble dishes such as steaming bowls of Heng Hua mee, hearty servings of chicken porridge, peanut-coated glutinous rice balls (mochi) and the ubiquitous or-chien (oyster omelette) are the reasons many frequent the night market. For thirst-quenchers, you will find teh c peng special and freshly-pressed sugar-cane juice.

Modern culinary innovations serve as an interesting interlude to the “traditional eats” theme. Taiwan sausages and Japanese burgers are among some of the non-local offerings. A cake stall with its quirky take on the ever-popular traditional butter cake, presents their version in the shape of cat paws and rounds out this food market experience.

There are tables along the entire lane but for those who prefer to settle down at a table with a roof over their heads to savour their food haul, they are always welcomed to seat themselves at the air-conditioned Kai Joo Café or at any of the coffee-shops on either side of the lane, provided they order a drink there.

With food being a huge deal to Kuching residents, Kai Joo Lane Night Market has the potential to become a permanent fixture. The food bazaar currently features 30 vendors but the committee that is running the market is looking into the possibility of bringing in even more vendors to offer a greater food experience to patrons.

For more updates on the Kai Joo Lane Night Market, check out their Facebook page.

This article first appeared in the January-March 2017 issue of Borneo Insider’s Guide magazine. 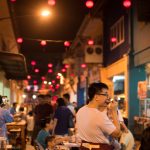 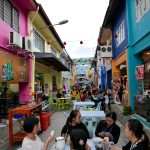 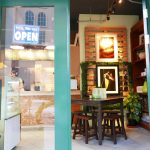 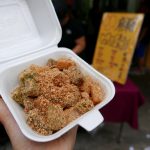 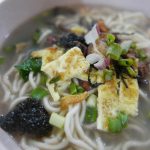