The New Ride in Town

The New Ride in Town

There’s skateboarding, and then there’s cycling, but there’s another lesser known form of outdoor activity on wheels that’s been hitting the streets of Brunei: longboarding.

Some backstory on the longboard: its origins can be traced back to Hawaii, where surfers attached wheels to boards to mimic the action of surfing on land when conditions were not permissible on water.

So what is longboarding? If you see a person skateboarding on a much longer board, then chances are you just witnessed a longboarder at play. Much like skateboarding, longboarding involves riding on a board with wheels, except longboards, like its namesake, are longer and much heavier than the average skateboard. The lightness and upward curves on a skateboard makes it easier to perform tricks, while the length, weight and flatness of a longboard makes it more stable – but not necessarily easier to ride.

There are plenty of ways to ride a longboard. The normal, and easiest way, is to just cruise on the board. Slalom riding involves weaving the board through man-made obstacles, much like skiing. Another longboarding practice is freeriding, where longboarders perform a variation of tricks that accommodates the heavier board; and dancing, which sees less tricks and more complex footwork on and around the board. A more extreme practice is the adrenaline-pumping downhill longboarding, which requires you to ride the board down a long hill with several sharp bends, where you would be forced to slide the board to reduce speed and change direction.

If you’re new to longboarding, there are local longboard groups that would be happy to welcome you to the sport. As a longboarder for nearly two years myself, I’ve received tips and advice on freeriding and dancing from local groups Boardwithlife and Roadrash – the latter of which I’m a member of. These two groups hold weekly sessions for improving tricks and learning new ones every Wednesday (dubbed ‘Wedneskate’). I’ve also dabbled in the extreme sport of downhill longboarding, and if I were ever to return to that (and if I value my limbs) I would seek lessons from the guys at JustTabakIt (JTI) who specialize in downhill longboarding. But despite the differences in longboard practices, these three groups support and learn from each other, which makes for a very close-knit longboarding community.

But of course, if you’re planning to start, you need some longboarding gear first. The growth of this sport has helped make longboarding gear more accessible now than when it first hit the local streets, and these days you can easily drop by Grads Longboard Shop, JTI Boardshop and Smellthestreet Skateshop to get yourself a longboard and some gear. Alternatively you can also get a short cruiser like a Penny board, a smaller and trendier version of the longboard, most noticeably used by stylish millennials cruising down the streets.

The longboarding trend has seen a steadily growing following since it was first introduced here, with a lot of help from longboarding events like the Agok Drop, Go Skate Day’s Slide Jam and other sessions organized by the longboarding community. This trend, though fleeting to some, has definitely left its mark here in Brunei to others. With the increase in longboarders, longboarding-centric events and support from the community and youth, it’s hopefully only a matter of time before Brunei gains recognition in other longboarding communities around the world.

To connect with longboard groups for events and sessions, follow them on Instagram: @jti_fastballs (JustTabakIt), @boardwithlifebn (Boardwithlife) and @roadrashskates (Roadrash). If you’re new to the sport and interested in trying it out, check out the gear at JTI Boardshop (@jtiboardshop), Grads Longboard Shop (@graduatesboardshop) and Smellthestreet Skateshop (@boiianaa_) on Instagram. 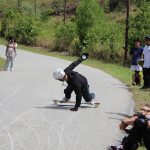 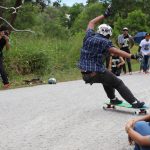 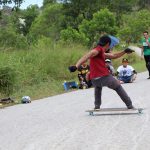 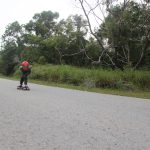 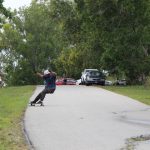 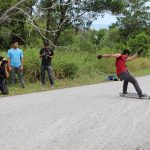 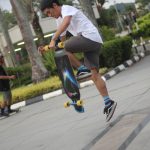 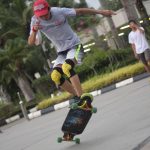 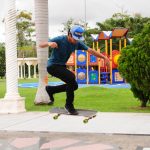 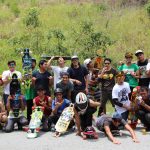