Every December since 2009, Laos has played host to one of the renowned film festivals in Southeast Asia. This is the eighth annual event of the Luang Prabang Film Festival (LPFF), which will run from 8 to 13 December this year and showcases the worthiest of Southeast Asian cinema. 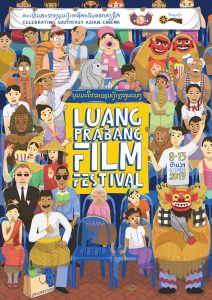 Earlier this month, LPFF announced its official selections to be screened at this year’s festival. Official selections were made by “Motion Picture Ambassadors” (experts and critics from across Southeast Asia) who represent a collection of the finest contemporary films from their respective countries.

In the lineup this year are 32 feature films (including one from Brunei):

In addition to this lineup are four programs of short films including a selection from Vientianale 2017 and Viddsee’s 2017 Shortee winners.

Along with film screenings, audiences will be able to attend four public discussions this year including “Protecting Films in the Age of the Internet”, “Muslim Voices of Southeast Asia”, “Financing Your Non-Fiction Film”, and a discussion on Thai cinema for the festival’s SPOTLIGHT program. This year’s SPOTLIGHT program will be devoted to Thailand, featuring a full day of screenings and a discussion of Thai feature films hosted by Kong Rithdee, LPFF’s Motion Picture Ambassador for Thailand, who is a filmmaker and a film critic for the Bangkok Post.

This year marks the second LPFF Talent Lab for Southeast Asian Filmmakers, led by the Tribeca Film Institute® (TFI), which will feature a workshop for ten filmmakers on grant writing and project pitching. The project with the most promise will be selected to attend the TFI Network market, which will take place at the Tribeca Film Festival 2018 held in New York City. This is a fantastic opportunity for aspiring filmmakers as TFI will arrange meetings for the filmmaker with editors, distributors and financiers there. On top of that, Aurora Media Holdings will be offering the Aurora Producing Award of USD10,000 to be used as starting funds for the selected project.

The festival’s program will also include a documentary production workshop, a new addition this year, organized by the US Mission to ASEAN and the American Film Showcase. The five-day workshop will be conducted by Filipino-American filmmaker Ramona Diaz for 12 participants from the Youth Southeast Asian Leaders Initiative.

All screenings and activities of the festival are free and open to the public.

LPFF 2017 is proudly supported by the Lao Brewery Company, the festival’s biggest sponsor.

For more information on the festival, visit lpfilmfest.org or stay up to date at facebook.com/lpfilmfest.