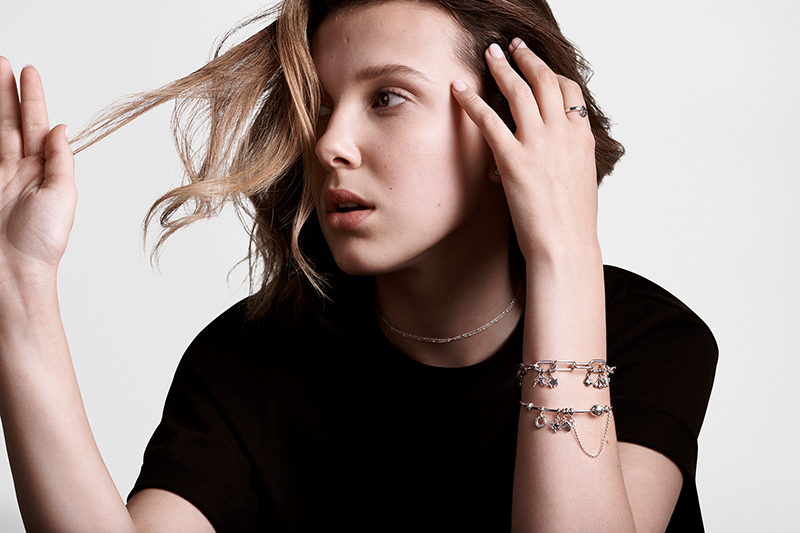 Pandora and Stranger Things fans have much to look forward to this coming October with the announcement of the famous jewellery line and young actor’s partnership to design a new collection.

Millie Bobby Brown is now one of the faces of the new generation of talented actors with an important role in modern pop culture, and has been known for her unique and individual style. The two-time Emmy nominee and UNICEF’s youngest ever Goodwill Ambassador has been committed to effecting positive change among her generation.

In addressing her two-year partnership with Pandora to promote the collection, the actor said, “I feel extremely honoured to be partnering with Pandora. I love Pandora because everyone can tell their own story, and each symbol can represent your individuality.”

Lensed by acclaimed fashion photographer Cass Bird, the campaigh will feature images of the Stranger Things’ actor in her hometown of Atlanta, Georgia, donning her personally curated edit of jewellery from the collection. A digital film will also be released with Brown highlighting her personal collection to the new pieces.

Stephen Fairchild, Pandora’s Chief Creative and Brand Officer, praised the partnership. “Millie Bobby Brown is the perfect ambassador for the next generation of Pandora jewellery that empowers young women to express themselves. Not only an accomplished actor and making her presence as a voice of her generation known, she also brings a youthful and individual approach to jewellery that perfectly complements Pandora’s vision and creativity.”

The campaign will be launched digitally in October.

Millie Bobby Brown rose to prominence for her role as Eleven in the Netflix series Stranger Things. Her film debut came in 2019 with Godzilla: King of the Monsters. She is the youngest person to be featured on the Time 100 list of the world’s most influential people.

Keep up with all the exciting updates from the Pandora and Millie Bobby Brown collection by following #PandoraxMillieBobbyBrown.

Keep yourself updated with more exciting news from Pandora Brunei by following them on Facebook and Instagram.