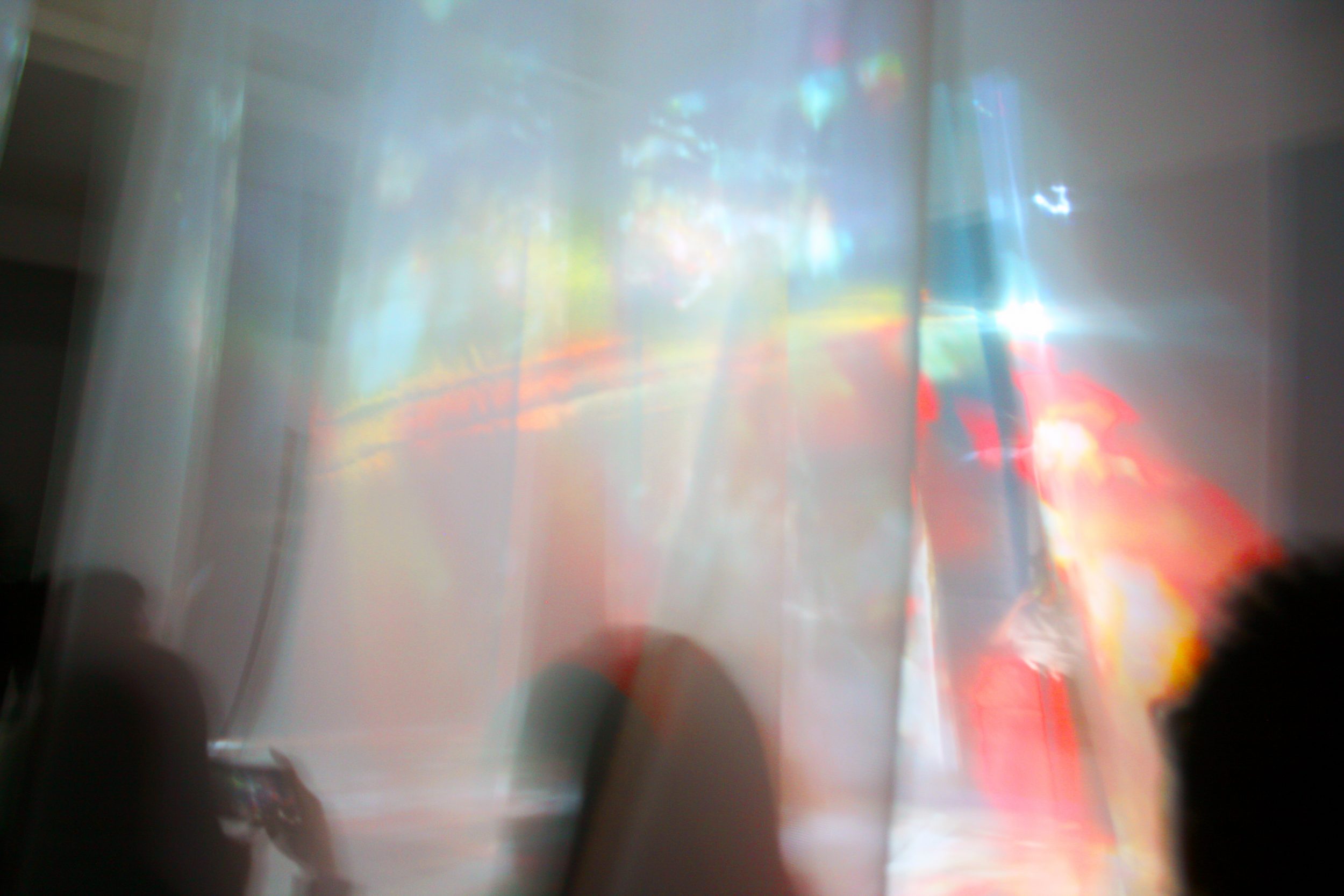 A chilly darkness engulfs you when you enter the small space of Sound & Canvas studio. The studio is located in Setia Kenangan 2 in Kiulap, a highly populated area that is congested with cars on any given day, something I imagine would have been a strike against the audio-visual space, but the sound of traffic is muted, and once the installation begins, it fails to register at all.

White drapes fall from the ceiling against a stark white floor, a set-up so simple you could never have guessed at the months of preparation it took for music composer Sandy Tan and her visual arts partners based in Singapore, Otherhalf Studio, to prepare this art installation. 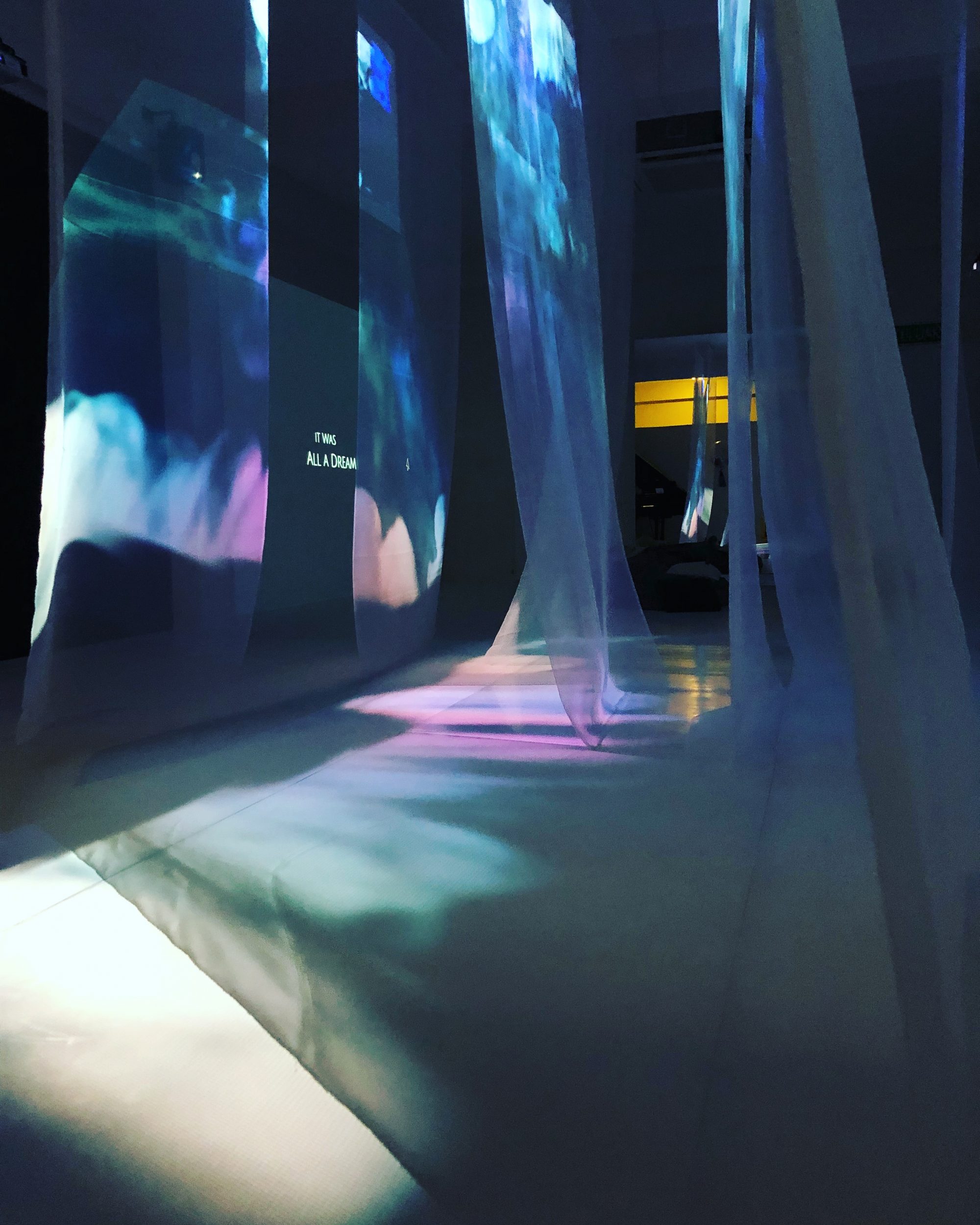 A good crowd amassed to view the launch of It Was All A Dream, an audiovisual installation that has been hyped about thanks in no small part to their success of their previous audio-visual installation, OH! Secret Garden from last year. After a welcoming speech by Sandy Tan and her collaborator, all at once It Was All A Dream begins and the audience is immersed into a ballet of shimmery light and sound. The white drapes become a canvas for the multi-coloured visual arrangement, and the music triggers emotional responses, encapsulating you into what has turned into a three-dimensional art installation.

Audio-visual exhibitions are few and far between in Brunei – it’s a genre of the art world that hasn’t fully been explored in Brunei yet. But Sound & Canvas founder, music composer and exhibit director Sandy Tan has long been enamored with the idea of merging music with visual art. 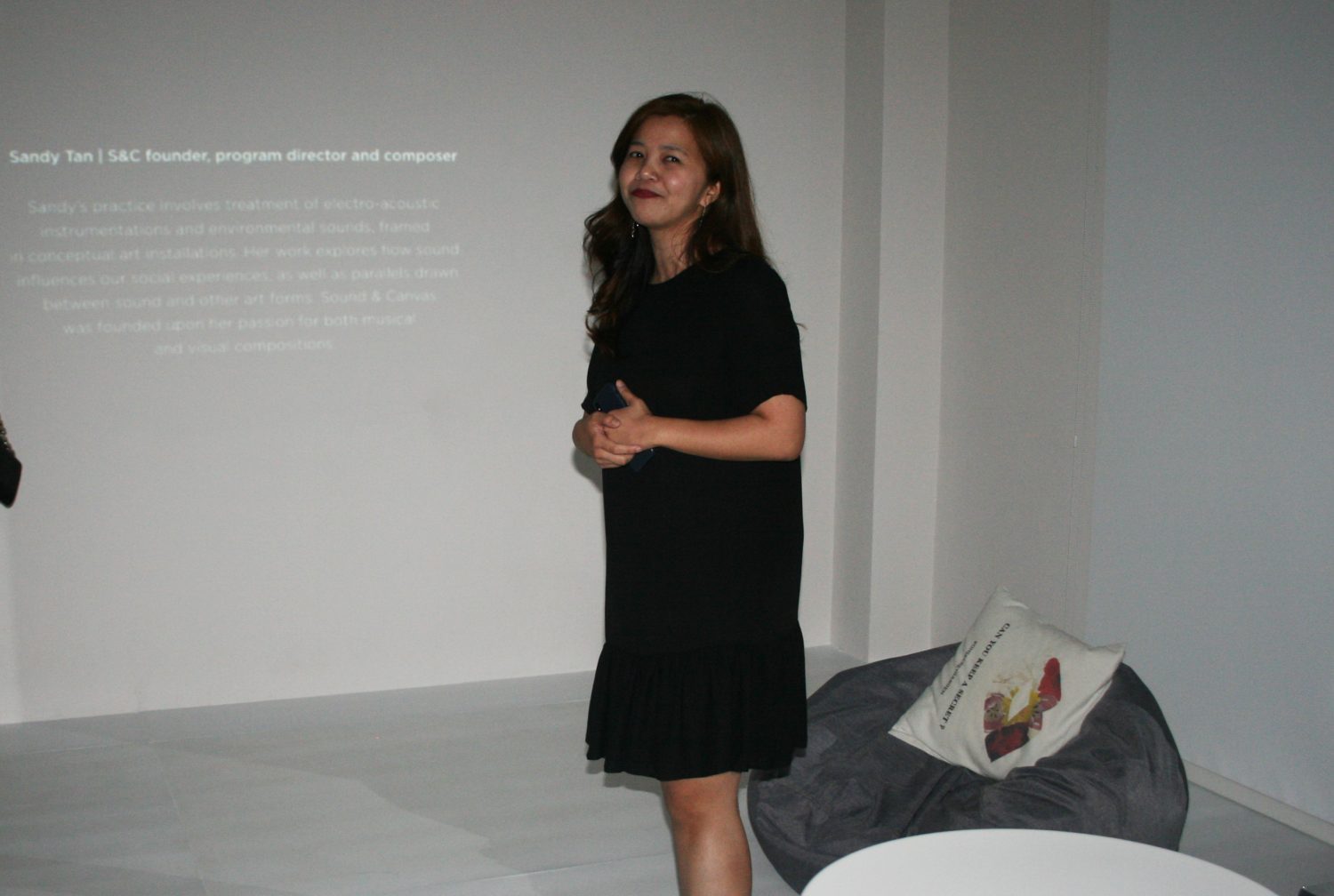 Sandy was kind enough to sit with us in her studio where we sipped coffee, sat on comfortable beanbags, and talked a little bit about her journey and where audio-visual art exists in Brunei.

From her career in journalism to music composer.

“Music was right there from the very start, so it wasn’t unnatural or anything. But obviously I, for one, came from a culture where’s it not natural that you would go into making music as a career. Like anyone else, I thought I should go down the path most travelled. It would be a career in journalism, and I loved it. Then after I worked for while, I learned what I needed to learn about writing for the industry, and it was then or never that I decided to really make myself practice creating music on my own. It’s still an experiment, it’s still a challenge – anyone in the industry would tell you that. But I’ve been very happy since the first audiovisual exhibit in November 2018, and I was very enamored by people’s warmth and curiosity. It’s what made me still passionate and motivated to do more. And it’s as simple as that.”

About audio-visual arts and the concept behind Sound & Canvas.

“While I was practicing the music composition, I knew that I loved something more than songwriting. The more I practiced, the more I was inspired by the visual works. So it was really born out of that, marrying music and visual art for one thing, but also different forms of art or creativity that really started, and inspired the name Sound & Canvas. Really, it’s just my love for sound, creating it, combining it with other things, and creating this kind of sensorial experience.” 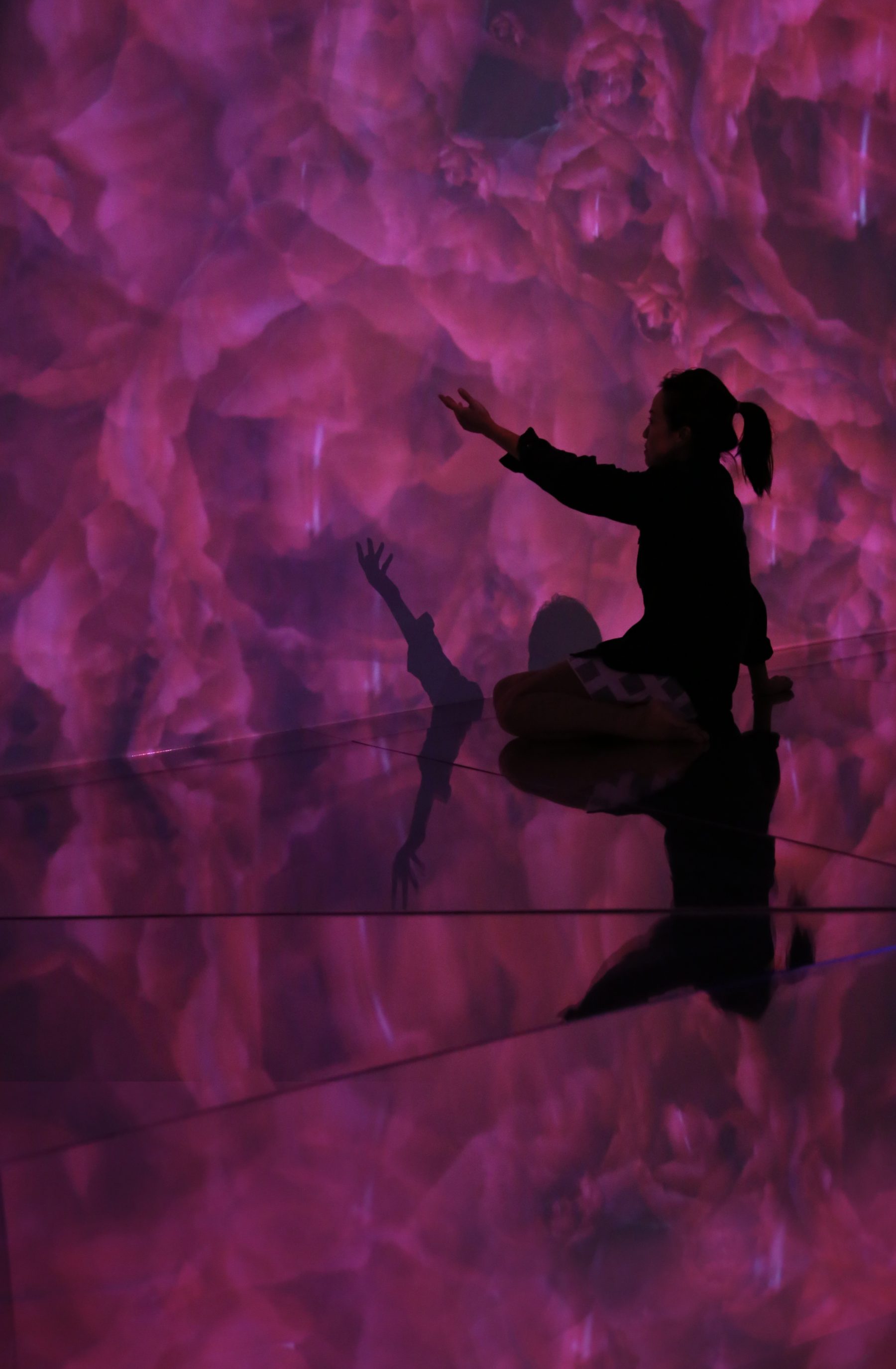 About her collaborators, Otherhalf Studio.

“It was really like how you would meet your best friend. You just relate and click with each other from the start, and you believe in one another. This was how our collaboration started and have continued to be. We just decided to try our best to create the love that we love creating. The rest is history.”

About their latest audio-visual venture, It Was All A Dream.

“It’s All A Dream, this title, when you hear about it, it’s such a literal title. And it’s kind of deliberately so, because I wanted to create that experience where you can escape to. But it’s also metaphorical, as in my description, it’s a reflection, it’s kind of like holding up a blurry mirror to one’s past, present and future. So that’s what you say, it felt like a dream.”

About the reaction from the audience and how it differs from the last exhibition.

“We really wanted it to be different (from OH! Secret Garden), before I announced everything, people who had come to the first show, they were saying, oh is it going to be mirrors again? And I think no, I hope not, because I do want people to understand that the works will always be, should be different, because as an artist or as a creator you want to always challenge people and yourself.”

“It Was All A Dream was deliberately more abstract than our first one, there’s no storyline, not even a motif that you can attach your experience to. And it’s important that we don’t imply a specific meaning to the work. People have said, oh I dreamt about my late family member because of what I saw, or that it reminded them of the circle of life, and we had no control over that. But we knew that we wanted to create a work that people can relate to. And so the audience’s reaction became so important because of that. So when they’re in here taking photos, taking videos, or just sitting here being reflective, they’re participating in the work. And so it’s them reacting to the work.” 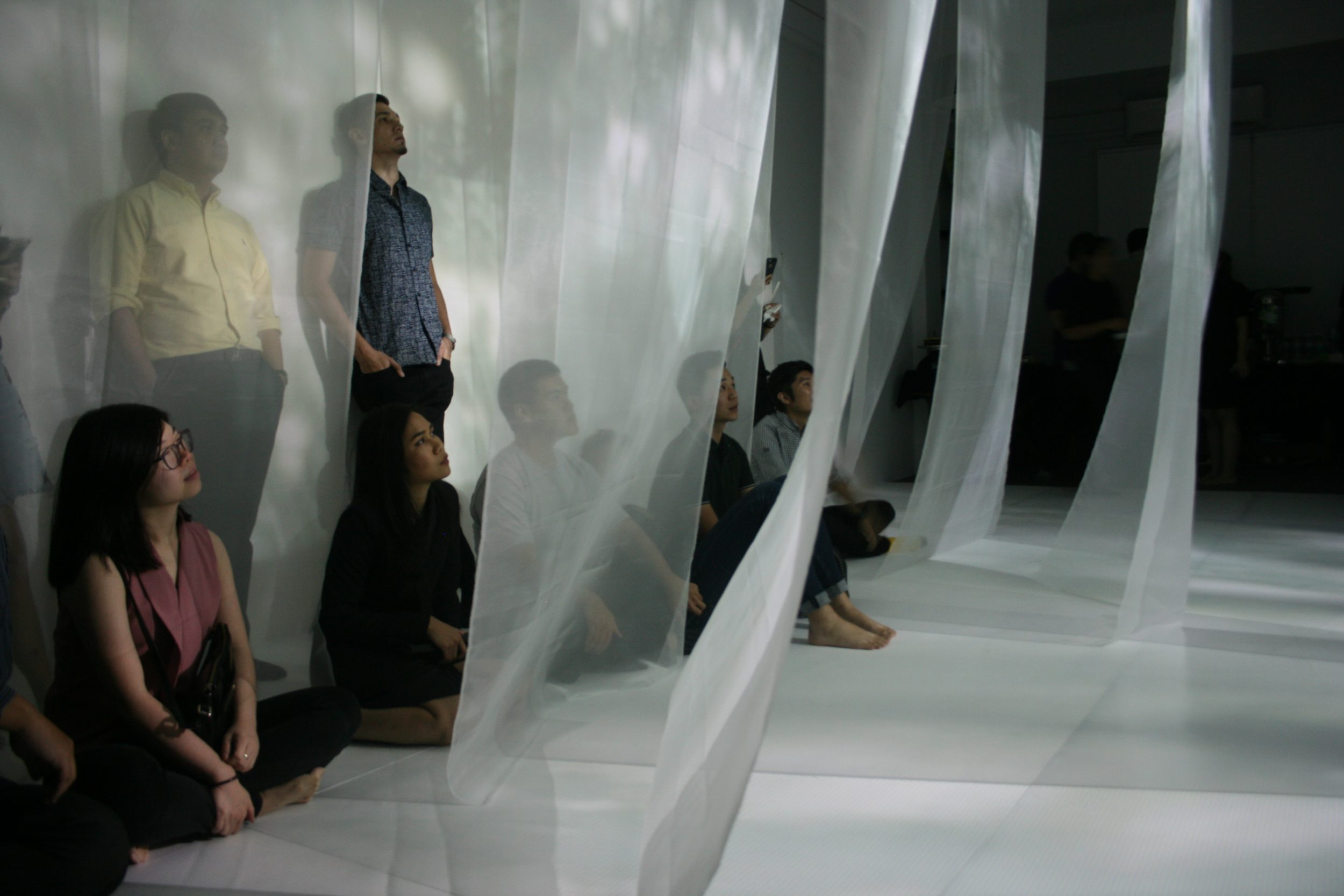 About the local audience.

“With the first, last year, that’s why I was so nervous. I thought I was going to something too out of this world that people would just look at me like I’m weird! Most of them were a young audience who came in, and they were so curious, and that gave me a very clear and interesting glimpse into the fact that even though it’s an infant audience, it’s an audience who has the capacity to understand. Even if they don’t understand it, they have the curiosity. Curiosity is always important in anything we do.” 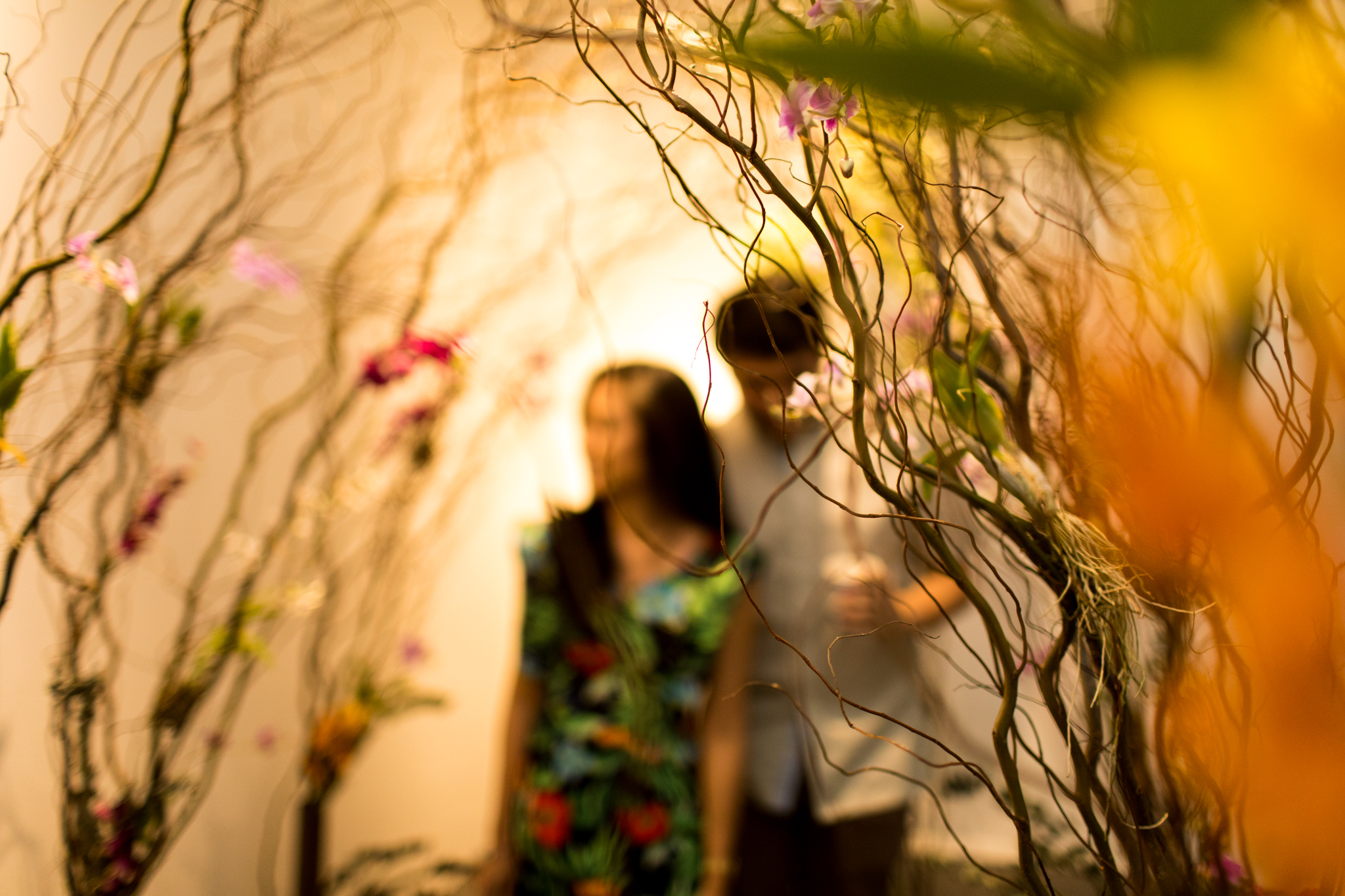 In handling the balance between putting out an installation that is both completely honest and accessible.

“We always say we can’t be too into ourselves. When you go through the process, and this is what I want to express, I’m sure there are people in the world who understand that. Because I’m still human, and the people that come into your space are human, and you must be brace, I learned that you must be brave with what you want to express. And the balance, I just hope that people wouldn’t be scared away. And if they’re scared away, I just have to respect that.”

Get updates on future art installations and events at Sound & Canvas by following them on:

Portions of this interview have been edited and condensed for clarity. This article first appeared in the January-March 2019 “Art of Borneo” issue of Borneo Insider’s Guide magazine.