The ASEAN Tourism Forum 2020 Embrace the Next Generation of Travel

The ASEAN Tourism Forum 2020 Embrace the Next Generation of Travel 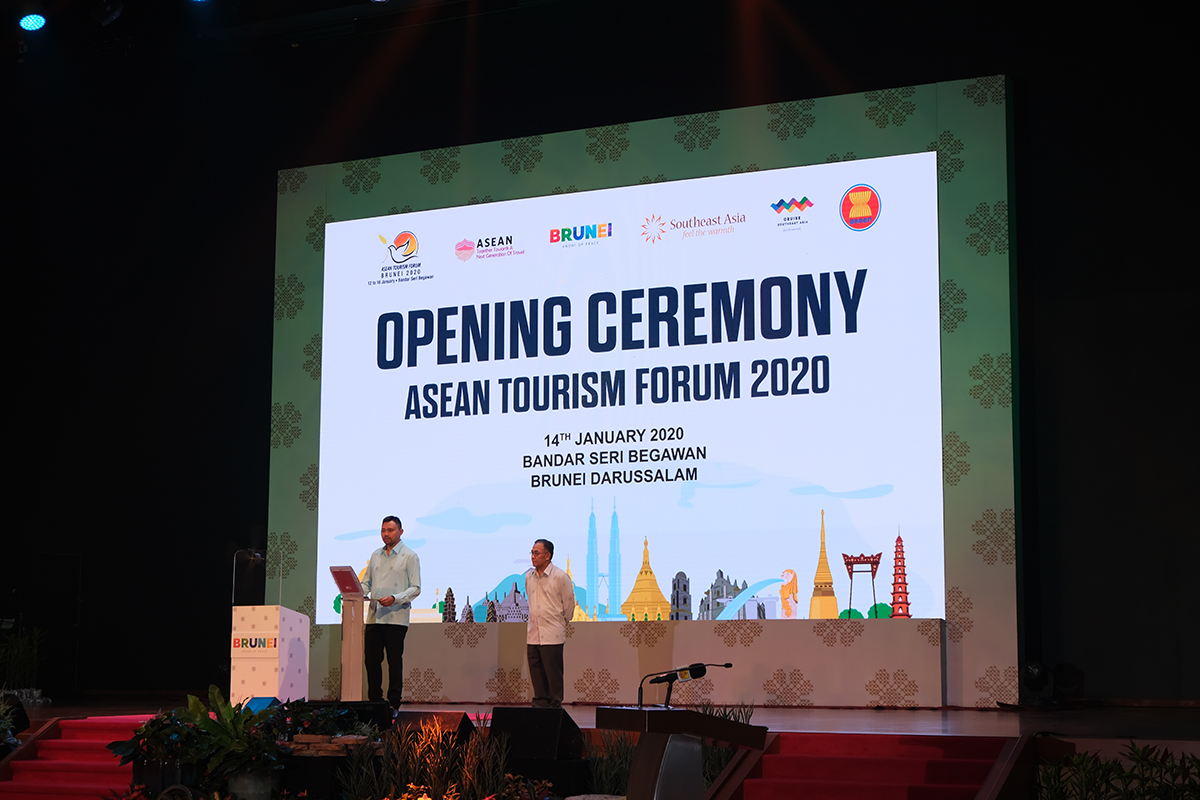 This year marked the 39th anniversary of the ASEAN Tourism Forum (ATF) and this year, the honour of hosting this well-known event went to our little Sultanate. Annually bringing together ASEAN members in a united effort to promote the Association of Southeast Asian Nations as one tourist destination, the event saw the arrival of exhibitors, buyers, trade delegates and members of the media from all 10 ASEAN nations in Brunei. Namely: Brunei Darussalam, Cambodia, Indonesia, LAO PDR, Malaysia, Myanmar, the Philippines, Singapore, Thailand and Viet Nam.

Held from 12-16 January 2020 at the BRIDEX International Conference Centre, with ATF TRAVEX taking place from 14-16 January, this year’s ATF focused on shedding the old and embracing a new generation of travellers, with a theme aptly named ‘ASEAN: Together Towards a Next Generation of Travel’. The new generation of travellers are those with a multi-device mindset and are accustomed to the fast pace of the modern world, where the fastest bookings and ease of travel can be sorted remotely with a click of a button, and this kind of speedy efficacy influences their travel choices. 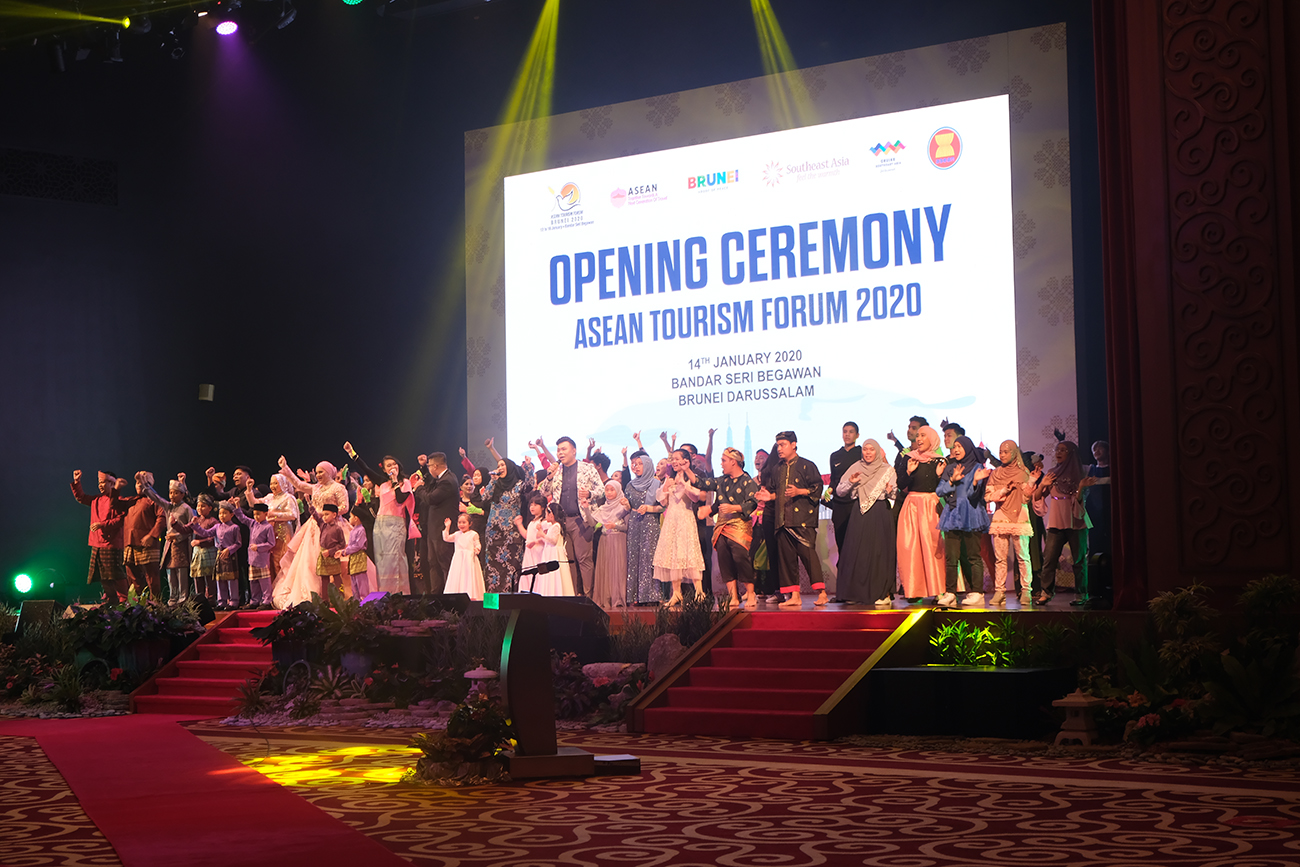 The ASEAN Tourism Forum event opened with a bang. On 14 January 2020, hosted by the Ministry of Primary Resources and Tourism for all ATF delegates, the ATF 2020 Opening Ceremony was held at the grand Indera Samudera ballroom at The Empire Brunei. The event was graced by the presence of His Royal Highness Prince Haji Al-Muhtadee Billah ibni His Majesty Sultan Haji Hassanal Bolkiah Mu’izzaddin Waddaulah, the Crown Prince and Senior Minister at the Prime Minister’s Office, who officiated the opening of the ASEAN Tourism Forum as well as the launch of the new ASEAN Tourism website.

His Royal Highness was greeted by Yang Berhormat Dato Seri Setia Awg Haji Ali bin Apong, the Minister of Primary Resources and Tourism as well as the Chairman of ATF 2020, along with the ASEAN Tourism Ministers. His Royal Highness was then treated to a mini showcase by the Ministry of Transport and Infocommunications along with Huawei Technologies (Brunei), and a demonstration on the use of Virtual Reality Technology in travel. His Royal Highness was then briefed on Digital Technologies for Smart Tourism by Awg Haji Muhammad Nazri bin Haji Muhammad Yusof, Permanent Secretary at the Ministry of Transport and Infocommunications, as well as the 5G Technology in Smart Travel by the Chief Executive Officer of Huawei Technologies (Brunei, Kevin Zhang.

It was a lively evening filled with performances by local artists, who performed notable cultural dances and hits from each ASEAN nation throughout dinner. The performances culminated in a rousing performance by Hans Anuar, Yaniety Junaini, Ruby Chong, Qeez Idrus, Dayat Ahim, Fame Masri, Yasmeen Liew, Dydy, DJ Lela, Arif Yahya, Vivace Adagio, Seri Mulia and the Lively Dancers Group, who belted out the original song ‘We Are the Best’ to an enthusiastic audience.

ATF exhibitors, buyers, trade delegates and members of the media alike swarmed His Royal Highness upon his departure, taking the golden opportunity for a selfie, a few words of welcome and thanks, or just a handshake and a smile.

ATF TRAVEX had kicked off earlier in the day, taking place at the BRIDEX Exhibition Hall, with TRAVEX sessions, media briefings and bilateral meetings peppered throughout the three-day event at different venues. ASEAN members also took the time to treat ATF buyers, exhibitors and media by hosting special-themed lunches and dinners with their own nation’s theme, entertaining guests with cultural song and dance performances. 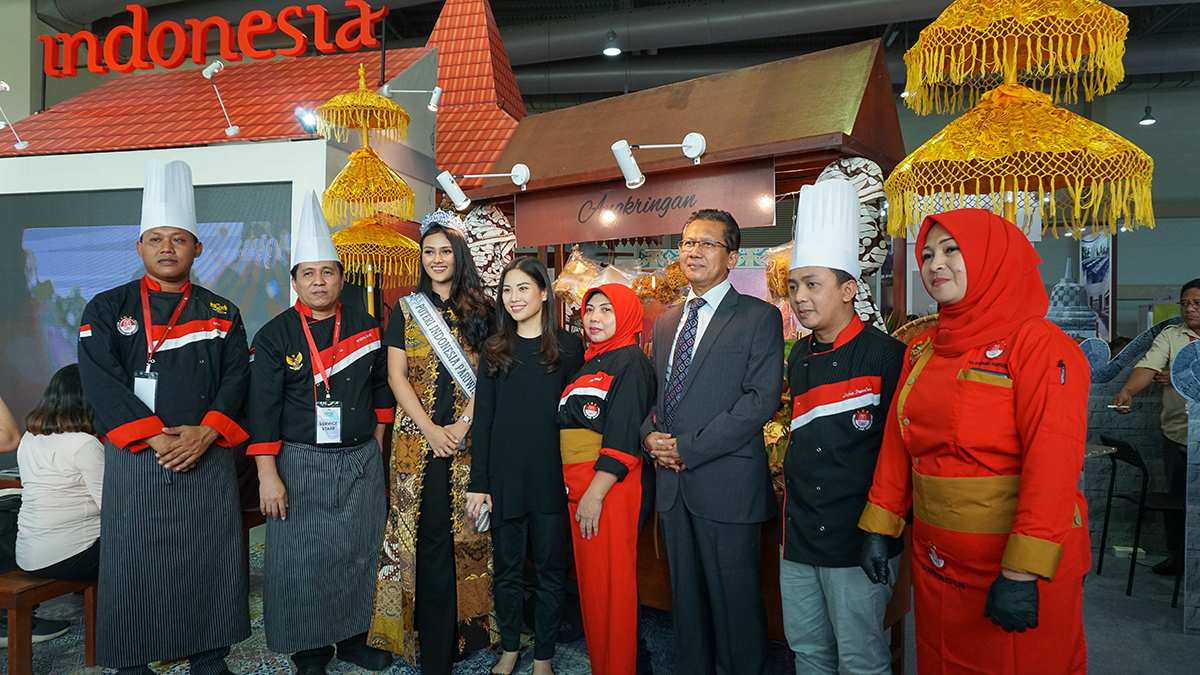 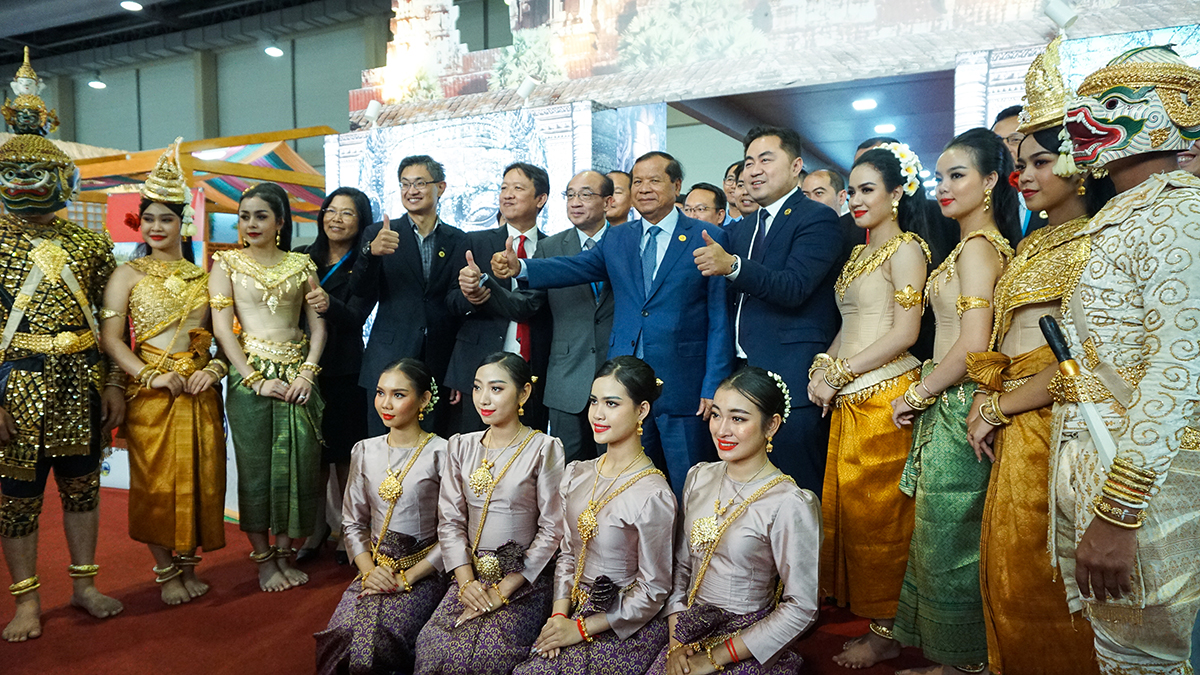 The future of modern travelling was the focal point for this year’s ATF, which introduced opportunities to further the dialogue at official meetings and at ATF Travex – the world’s largest ASEAN destination, product and service showcase. For three days, the ATF TRAVEX event was held as a platform for the promotion, selling and buying of regional or individual tourism products of the ASEAN member countries. Its point was to promote the ASEAN nations as a single destination of multi attractions, and work together toward increasing the number of arrivals into ASEAN member states while raising awareness on Intra-ASEAN travel. 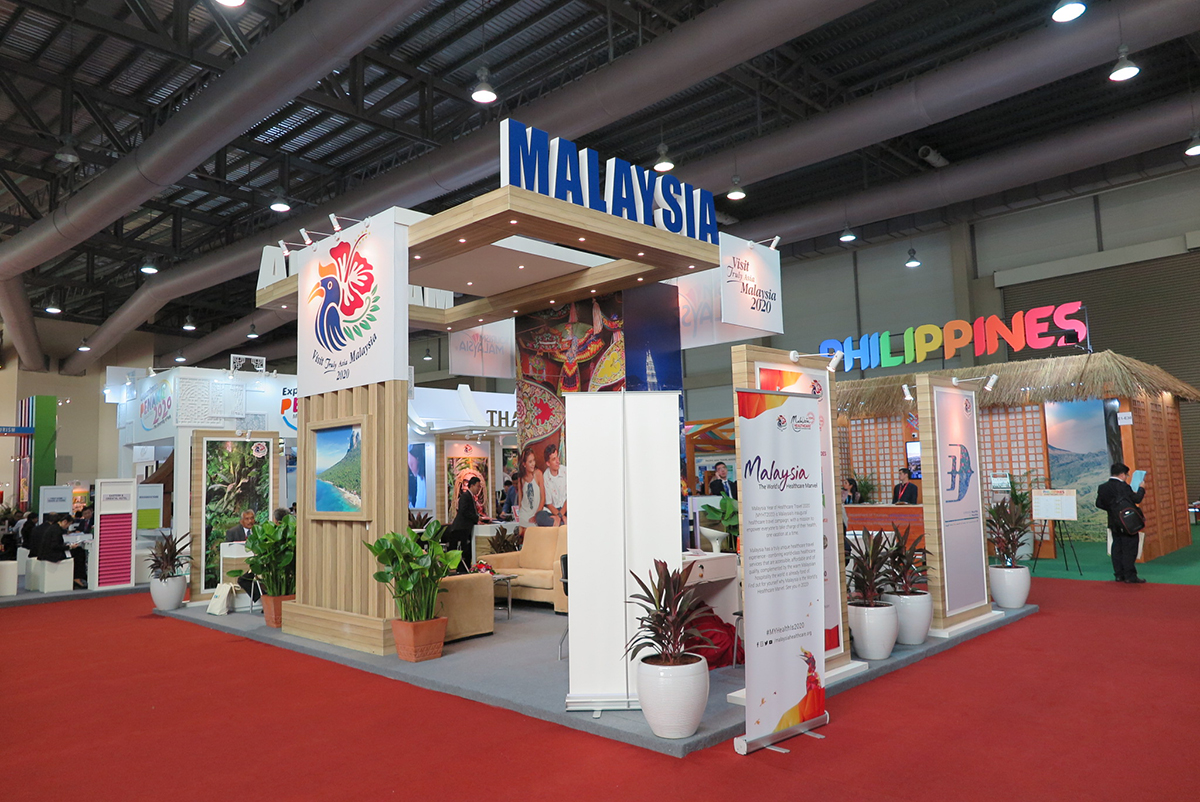 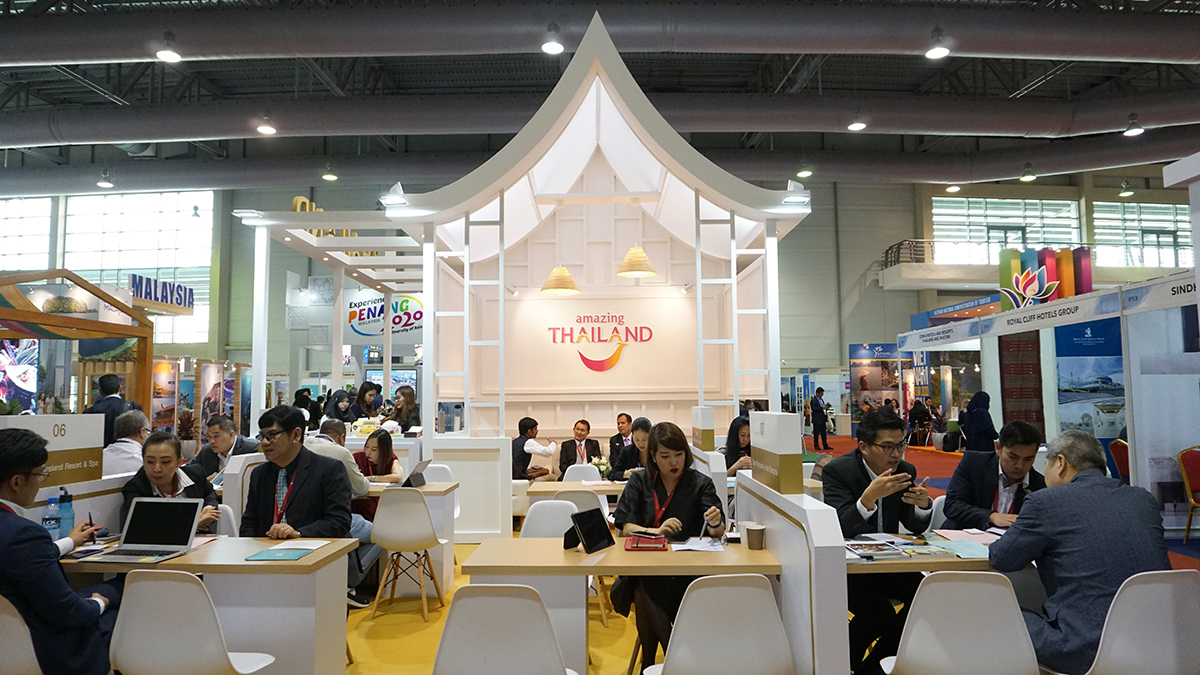 ATF 2020 culminated with the ASEAN Tourism Ministers Press Conference held on 16 January 2020, the last day of the event. Held at the Indera Samudera Grand Hall at The Empire Brunei, the tourism ministers of each ASEAN nation assembled to address the media on concerns about future plans with ASEAN tourism. 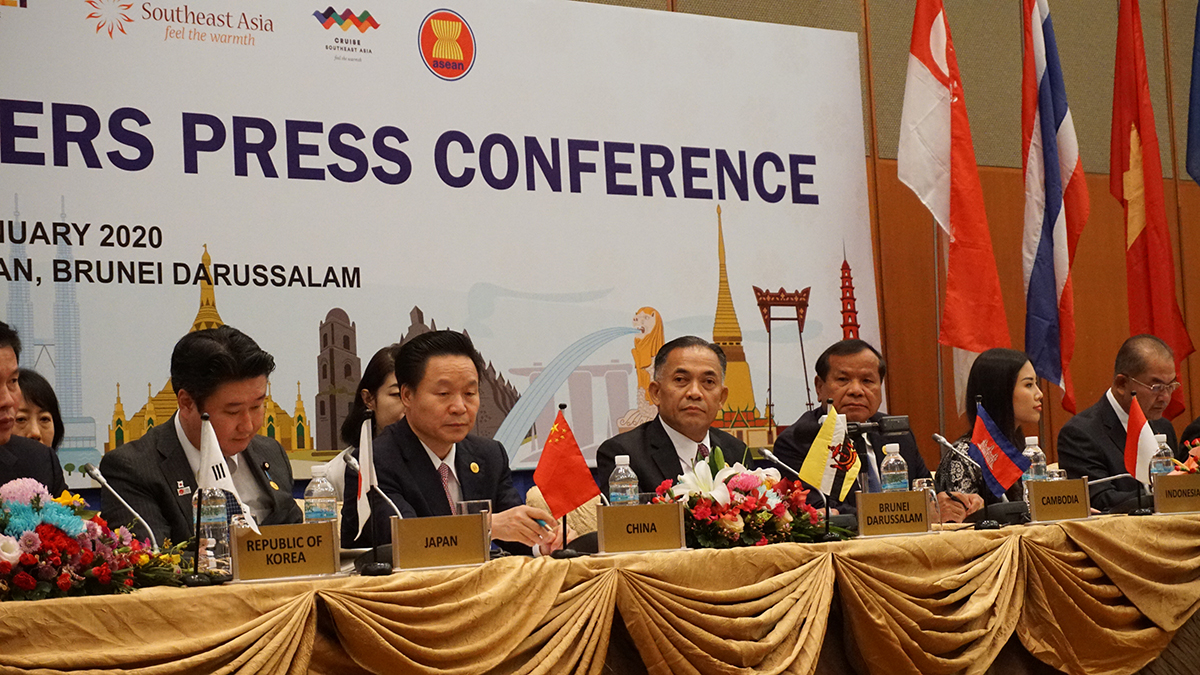 The ATF Closing Ceremony commenced straight after the press conference, where the ASEAN Tourism Awards Presentation Ceremony was also held. Awards were given out to those at the forefront of each nation’s tourism industry, handed on stage by their own tourism ministers.

Speaking briefly in regards to hosting the ATF 2020 event in Brunei, Yang Berhormat Dato Seri Setia Awg Haji Ali bin Apong, the Minister of Primary Resources and Tourism as well as the Chairman of ATF 2020, spoke warmly, “I’m very happy with all the preparations that were made for the ASEAN Tourism Forum 2020, which was managed wonderfully by TTG Asia. The point of this all is to attract tourists to come to the region, but as the host country, it’s also an advantageous opportunity to introduce visitors to Brunei and to make us a choice destination among ASEAN nations as well.” 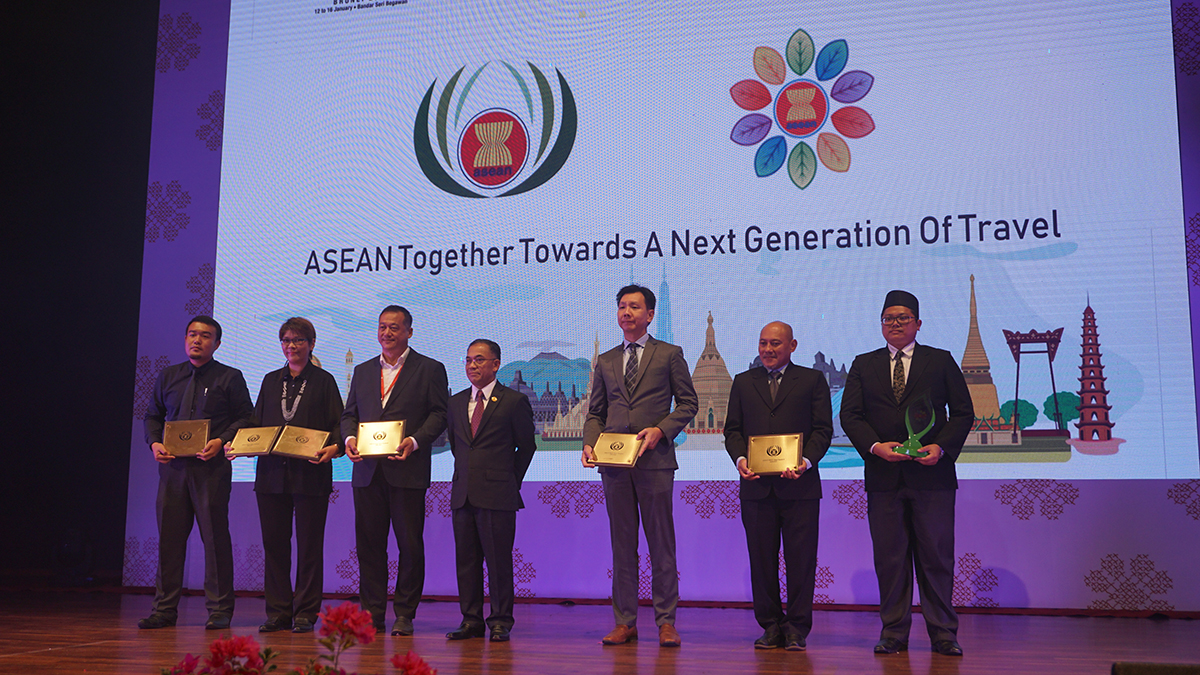 The ASEAN Tourism Ministers Press Conference was held on 16 January 2020 and was attended by the Ministers of Tourism in ASEAN member nations, led by Yang Berhormat Dato Seri Setia Awg Haji Ali bin Apong, the Minister of Primary Resources and Tourism in Brunei as well as the Chairman of ATF 2020.

Several points were discussed during the press conference, which took place within the framework of ASEAN Tourism Forum 2020, and covered points from the 23rd Tourism Ministers Meeting held on 15 January 2020, among them:

In 2019, ASEAN saw an increase of 7% in international arrivals (133 million in total) according to statistics. The number of intra-ASEAN tourist arrivals accounts for about 36.7%.

Digital tourism is recognised as one of the key activities to be aligned to enhance the public’s experience in assessing information and services. ASEAN digital tourism is currently under consideration to be adopted by the ASEAN leaders at the 37th ASEAN Summit which will be held in Viet Nam toward the end of 2020.

The Ministers welcome the development of festival tourism 2020, which highlights the various festivals and activities in ASEAN Member States throughout 2020.

In 2019, the ASEAN Plus Three region attracted 244.5 million international visitor arrivals (an increase by 5.8%), and the Ministers are optimistic that the tourism industry in the region would continue their growth as the ASEAN Plus Three nations strengthen their cooperation through mutually beneficial projects and activities.

The Ministers endorsed the ASEAN Plus Three Framework on Environment Management Standards and also agreed to develop the successor document to the APT Tourism Cooperation Work Plan in 2020 to synergise the subsequent work plan with the ASEAN Tourism Strategic Plan (ATSP) 2016-2025.