The Wild Side of Nanamun River

The Wild Side of Nanamun River

No visit to Sabah is complete without going on one of its many wildlife tours that highlight a truly amazing collection of rare and endemic species. One of the most bizarre is the proboscis monkey famed for its long protruding nose, pot belly and boisterous acrobatics through the tree tops as they settle down for the day along mangrove lined river banks.

While larger proboscis monkey populations are concentrated on the east coast, there are several places in the west coast close enough to Kota Kinabalu city where you can go for a day tour in search of these remarkable creatures in their natural habitat.

The Nanamun River in Kota Belud district is located about two hours drive north of Kota Kinabalu. My trip there was organized by TYH Tours & Travel, whose chatty tour guide named Jomo, gave an excellent commentary on the background of the area’s wildlife, people and culture as we journeyed through picturesque countryside. Paddy fields and villages pass by our window with the occasional water buffalo and cattle making an appearance along the route.

Tours usually start at 2pm to get you there in time for the evening river cruise.  The mangrove forest at Nanamun River is a relatively new destination for wildlife tours but a number of jetties have sprung up to cater to its growing popularity. Sighting of the often shy and skittish proboscis monkey is not guaranteed but there are other wildlife to look out for such as the long-tailed macaque, river otter, and birds to make the journey well worth the effort.

The river cruise lasts for about an hour, and after a break, dinner is served at sunset by the beach. A herd of cattle was spotted taking a leisurely stroll on the beach, enjoying the sunset like humans, certainly not something you see every day.  This addition to the tour gives you the opportunity to enjoy a bit of the natural beauty that Kota Belud is known for. After dinner, we go on another river cruise to see thousands of fireflies light up the mangrove trees like Christmas lights against the dark night sky. This spectacular view unfolds slowly as you cruise in darkness and has a magical quality to it that is absolutely breathtaking. 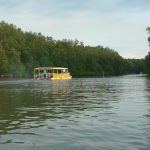 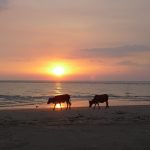 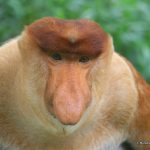 Nanamun River is about 20km from Kota Belud town which is one of the cultural hubs of Sabah. An essential highlight to the farming and fishing communities here is the weekly market where people gather to trade, strike up meaningful conversations over a strong cup of coffee or just to catch up on the latest gossip. It is a tradition that has carried on for more than a hundred years and continues to play an integral part in maintaining a close and harmonious relationship among all the different ethnic peoples here.

Kota Belud Market
Kota Belud is a melting pot of cultures in Sabah, and a major tribe here is the Bajaus who were once nomadic seafarers known as sea gypsies. Leaving their wandering past behind, the Bajaus settled in fishing villages along the coast while those who ventured further inland turned to farming and horse rearing. Horses were an important means of transportation in the old days and the horse riding skills perfected by the Bajau horsemen are still evident today, and remains an important part of their cultural heritage.

Once a year, Kota Belud hosts the Tamu Besar where people from all over the state flock to participate in the local festivities. Tamu Besar is literally the biggest tamu or open air market in Sabah and vendors come out in sell their best goods which represent the finest of their individual culture and traditions.

One of the highlights during this annual event is the parade of the Bajau horsemen or Cowboys of the East. Apart from displaying their unrivaled horse-riding skills, the Bajau horsemen would also dress their horses and ponies in resplendent costumes to match their own. Traditional sports such as buffalo racing delight the crowds and add more fun to the event.

Check out the event listing on the Sabah Tourism website for details. 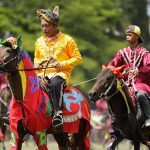 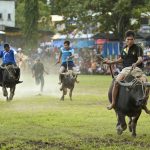